Wallowing Away at Wallum Lake and Other Places

It has been along time since I posted anything to this blog. With many social media outlet methods, the blog seems as old as DOS operating system. The COVUD virus has taken over our lives keeping us home, with all of the Grand Tours I generally participate in being postponed. One of those tours includes equestrian statues, which given the recent protests, has many of them being torn down by protesters.

Given that, rather than wait for these tours to begin I have created my own self directed tour of chasing down places on the National Register of Historic Places and following one of the Tours in one of the American Guide Series book. This Tour was Tour 9 in Rhode Island: A Guide to the Smallest State.

"The American Guide Series was a group of books and pamphlets published in 1937–41 under the auspices of the Federal Writers' Project (FWP), a Depression-era works program in the United States. The American Guide Series books were compiled by the FWP, but printed by individual states, and contained detailed histories of each of the then 48 states of the Union with descriptions of every major city and town. In total, the project employed over 6,000 writers. The format was uniform, comprising essays on the state's history and culture, descriptions of its major cities, automobile tours of important attractions, and a portfolio of photographs" (Wikipedia)

This tour enables me to be in Grand Tour mode and learn some history along the way. For my mode of transportation I use my 2015 Can-Am Spyder RT-S.

Left my house right around 10:30 and hit the first stop at Shrine of The Little Flower. From the AGS book>

Thérèse felt an early call to religious life, and overcoming various obstacles, in 1888 at the early age of 15[6], she became a nun. After nine years as a Carmelite religious, having fulfilled various offices such as sacristan and assistant to the novice mistress, and having spent her last eighteen months in Carmel in a night of faith (a time when she is said to have felt Jesus was absent and when she even felt tormented by doubts about the existence of God), Thérèse died at the age of 24, from tuberculosis. (Wikipedia) 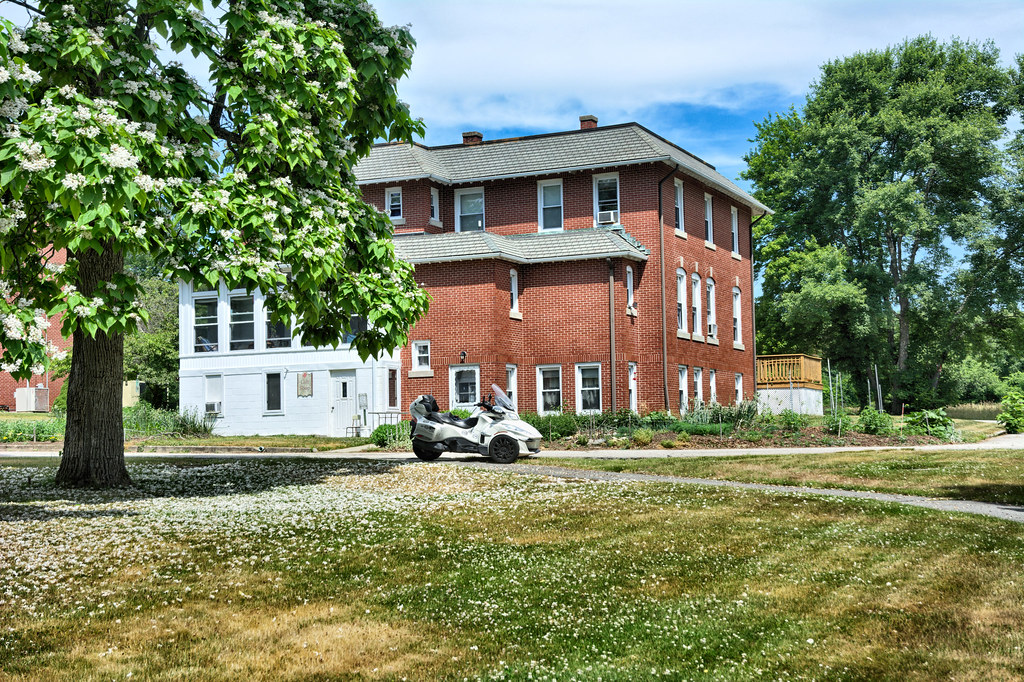 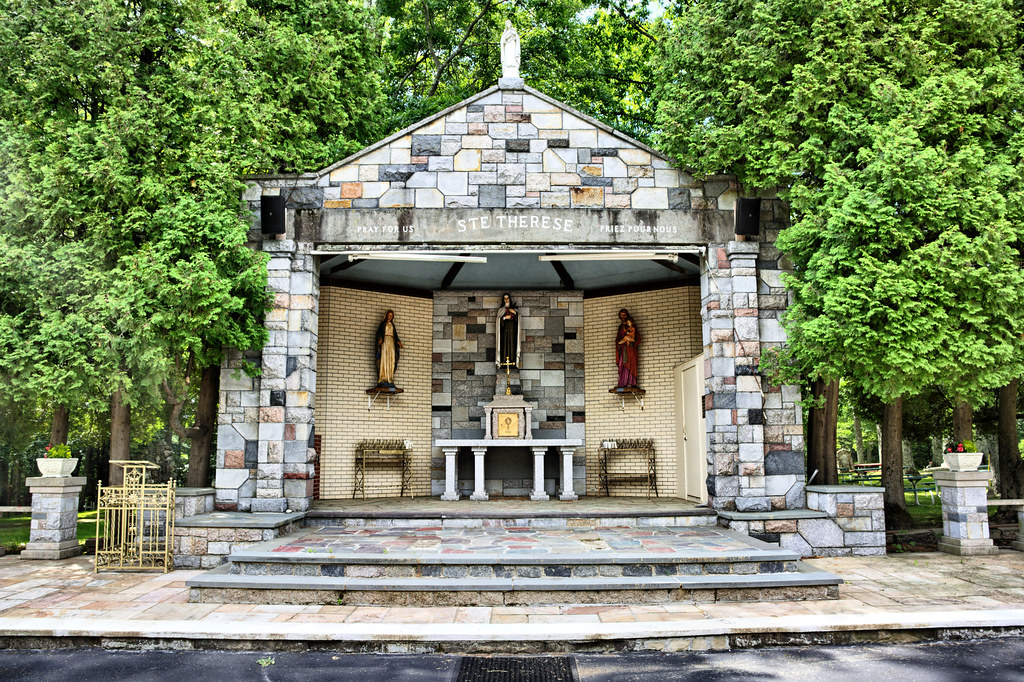 Stopped at the Nasonville Mill thinking it might have been one of the many mills on the tour (it wasn't).

The village of Nasonville was founded in 1825 by Leonard Nason who purchased the land on both sides of the river. Previous to that time, it was considered a wilderness. Mr. Nason immediately built a dam, cleared the land, dug a trench and mill race, erected a dwelling house, and put up a small mill for the manufacture of axes and hoes. In the spring of 1826, he had his machinery operating and built houses for his workers.

By 1850, 1000 chopping axes and hoes a day were manufactured there. Mr. Nason purchased tracts of land to expand his acreage and holdings from various landholders. After several changes in ownership, losses by fire, and with additional buildings constructed, Joshua Perkins leased the property in 1886 and started manufacturing fancy cashmeres and woolens. Perkins built a large general store in the village, which supplied not only his workers but other inhabitants in the immediate vicinity. Later, Austin T. Levy bought out Mr. Perkins and continued manufacturing woolens until 1959 when the mill was sold to a plastics manufacturer. LINK 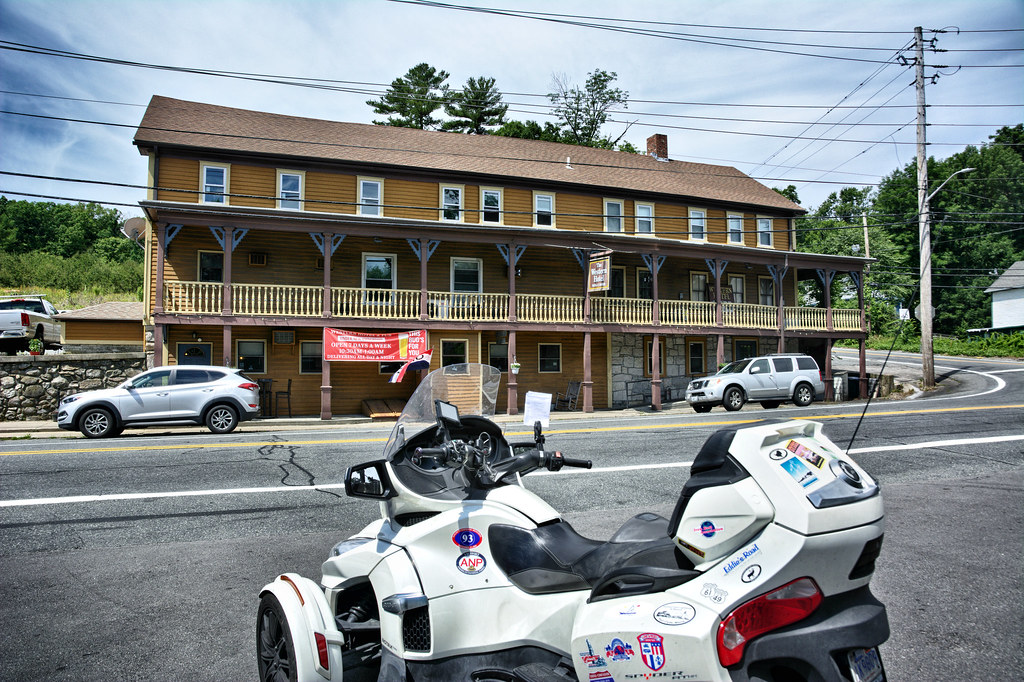 Also located here is the Nasonville Arch Bridge built in 1907 and crosses the Branch River. 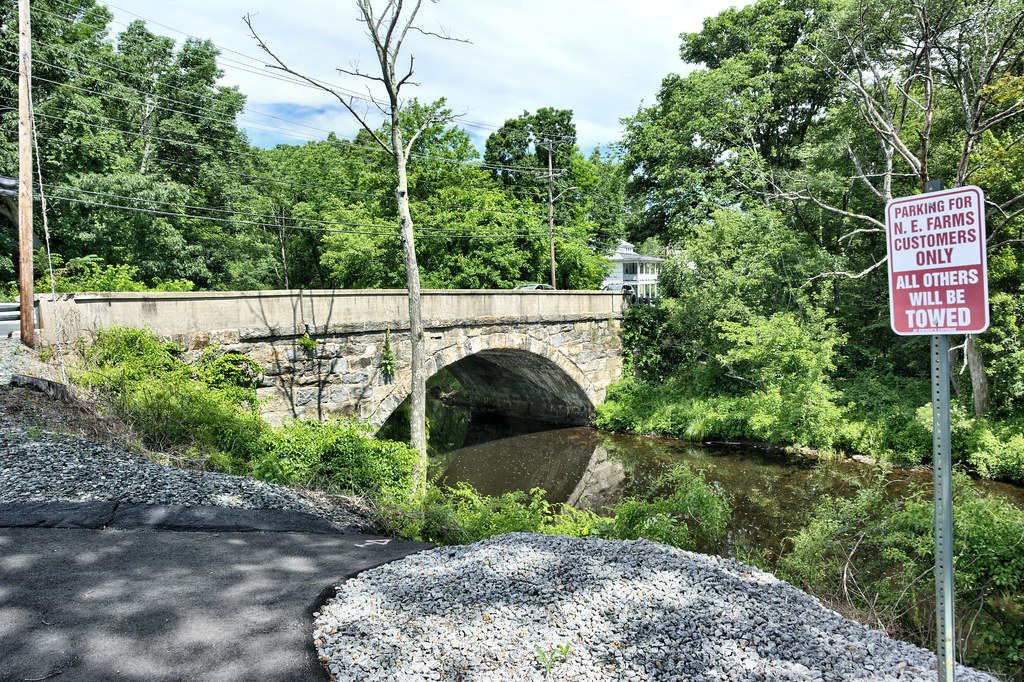 Headed down Victory Highway thru Oakdale (a Historic District) into Glendale to a demolished mill site. The site isowed by Metech Recycling, an electronics recycling business. I wonder what is just below the top soil. This was a stop on the Tour 9. 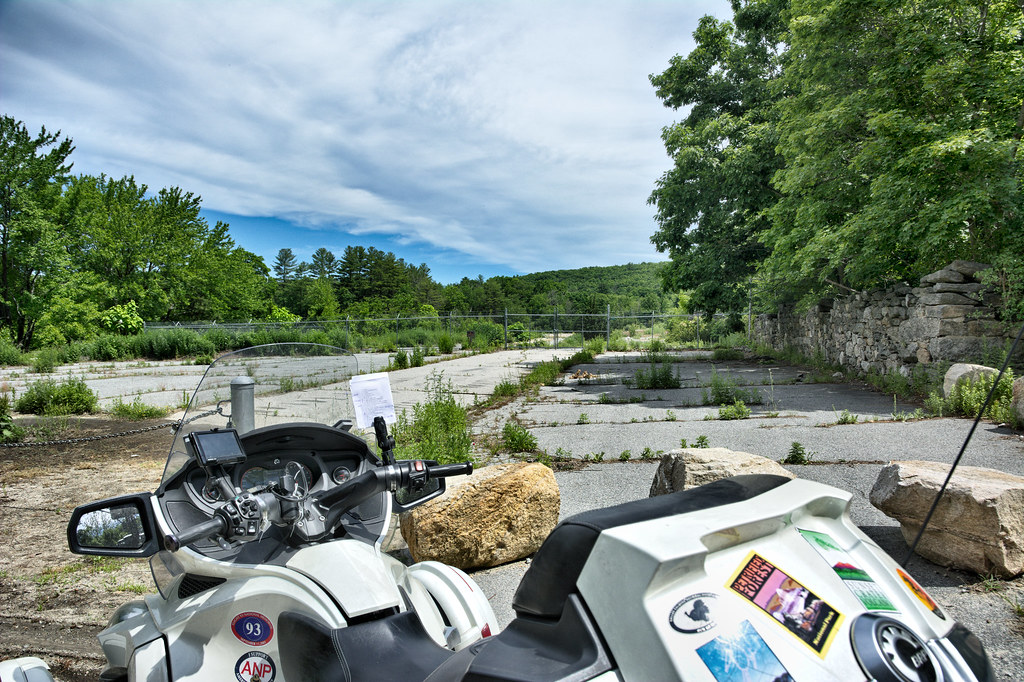 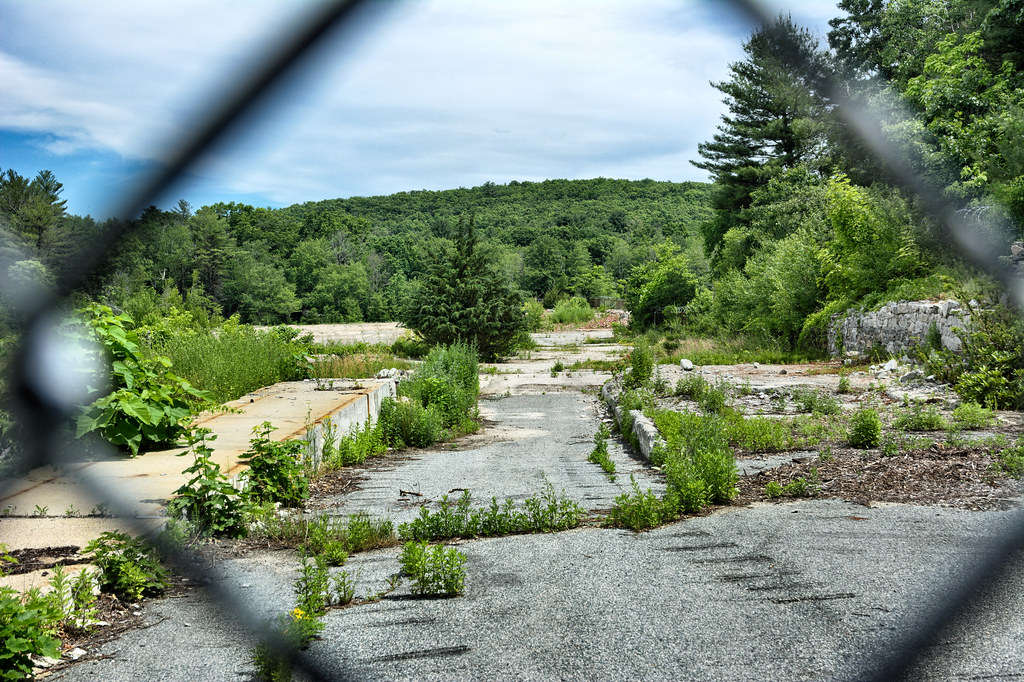 Making a UTurn headed up Central St into Harrisville proper. There are many AGS stops in Harrisville before heading out of the village. The most prominent building is the Harrisville Mill No 4

At the Tinkham Mill site there was a saw and gristmill in 1800, a spindle shop, then a cotton mill in 1832. Five buildings were here by 1893 for the manufacture of fancy worsted cloth. Mr. Tinkham bought out Mr. Farwell in 1884, and continued on for many years. William Tinkham owned the mill complex shown above and needed a better way to get supplies to his mills and the finished product shipped out. He was prime mover with mill owner A. L. Sayles of Pascoag in bringing the railroad to Burrillville. William Tinkham's son Ernest leased the mill complex to Austin T. Levy in 1916 after his father’s death. In December 1919, all four mills, along with 61 tenements, were purchased by the Stillwater Company. The tradition of first quality worsted cloth continued until the mills closed and moved south in the 1950s. LINK 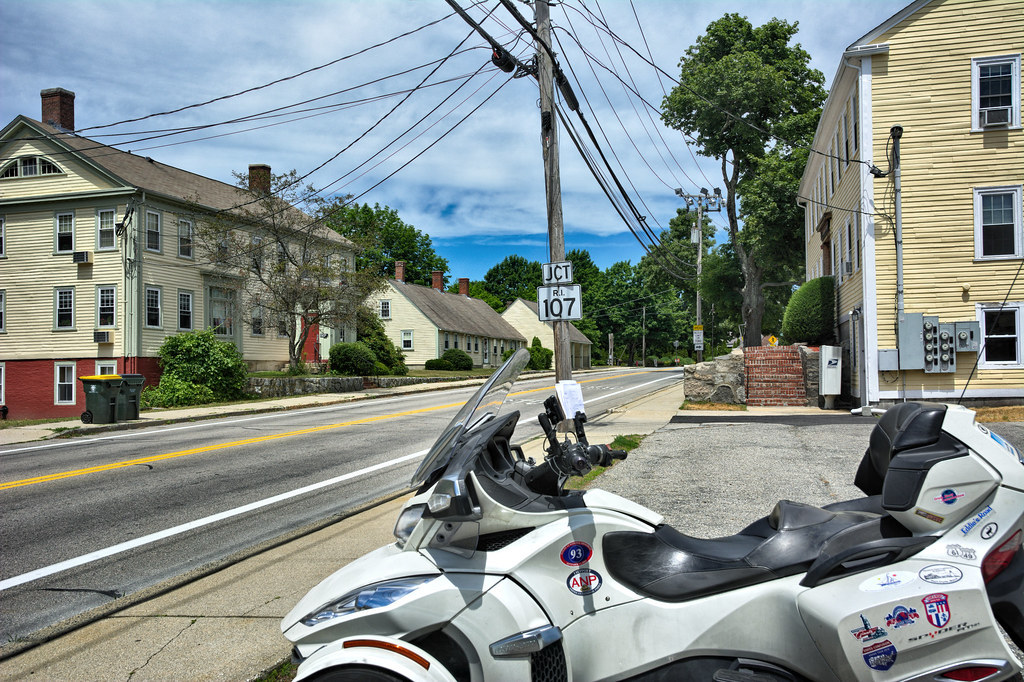 Right in Harrisville center is Joseph O. Clark Homestead and Aunt Hettie Harris House. These are located right across the street from the Burrillville Town Offices. Burrillville is made up of little villages, which include Bridgeton, Glendale, Harrisville, Mapleville, Nasonville, Oakland, Pascoag and Wallum Lake. 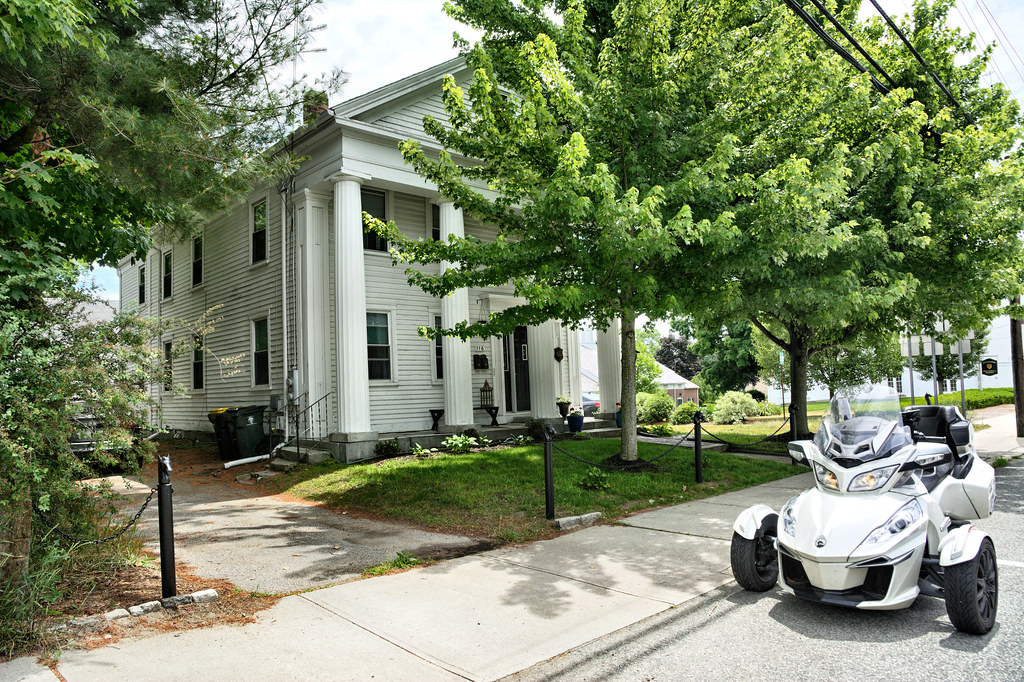 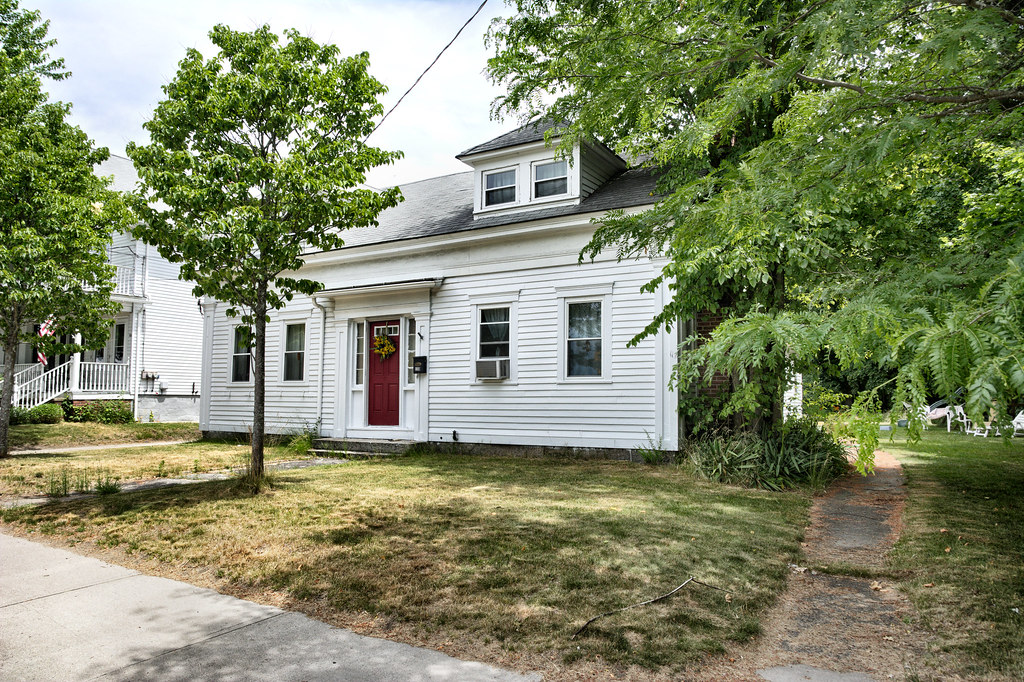 Not a stop for Guide purposes, however I have penchant for stopping at cemeteries,. They make for neat photos. 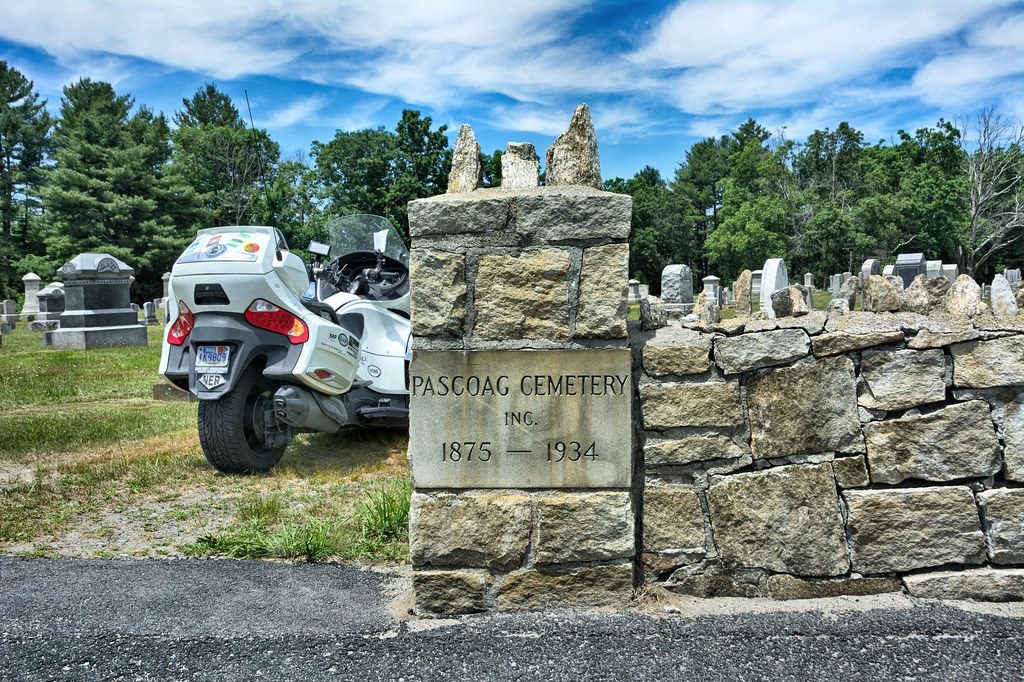 This hot rod, the building and the fact that it is a pizza place, just spoke to me as Americana. Had to stop, walk out in traffic, stand there until the traffic cleared to get the captures I wanted. Spots to capture what you want in photo are not always convenient. 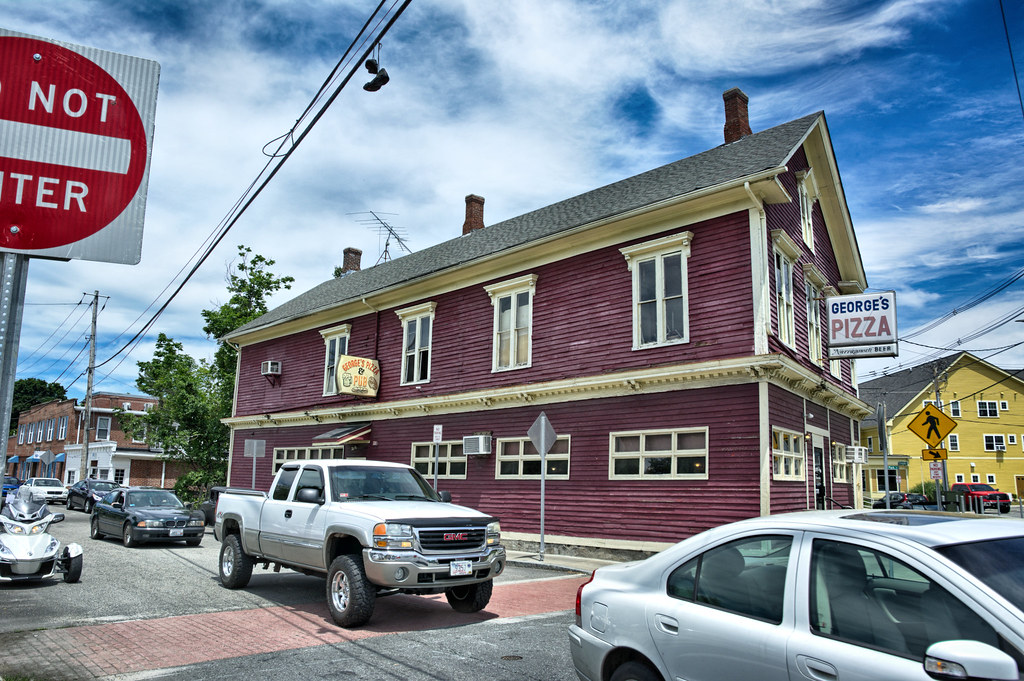 The capture I wanted 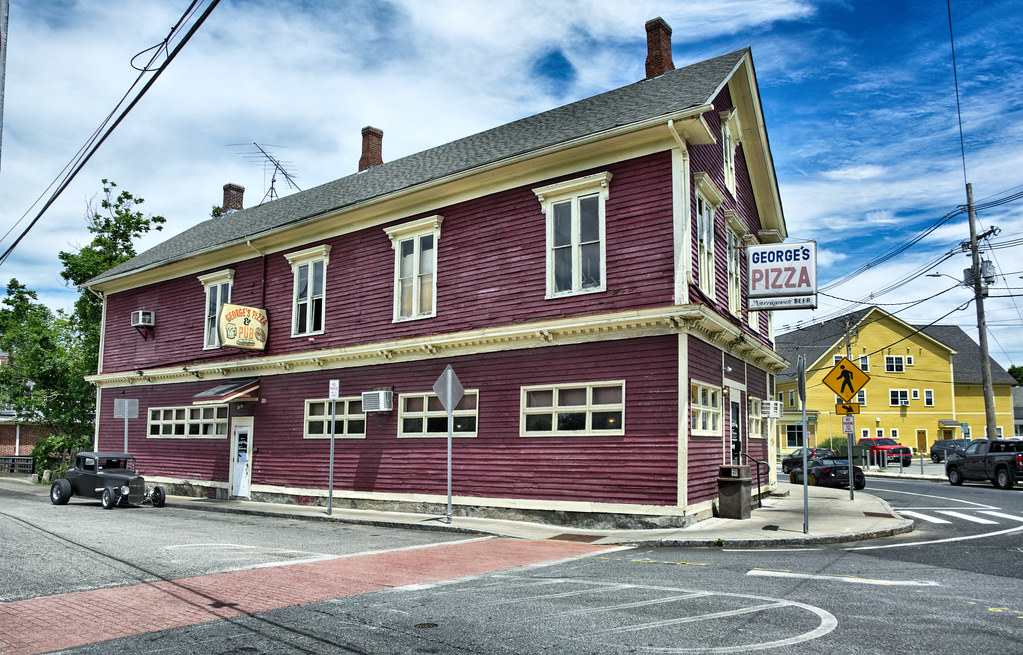 The hot rod is sort of lost so I moved to another spot. 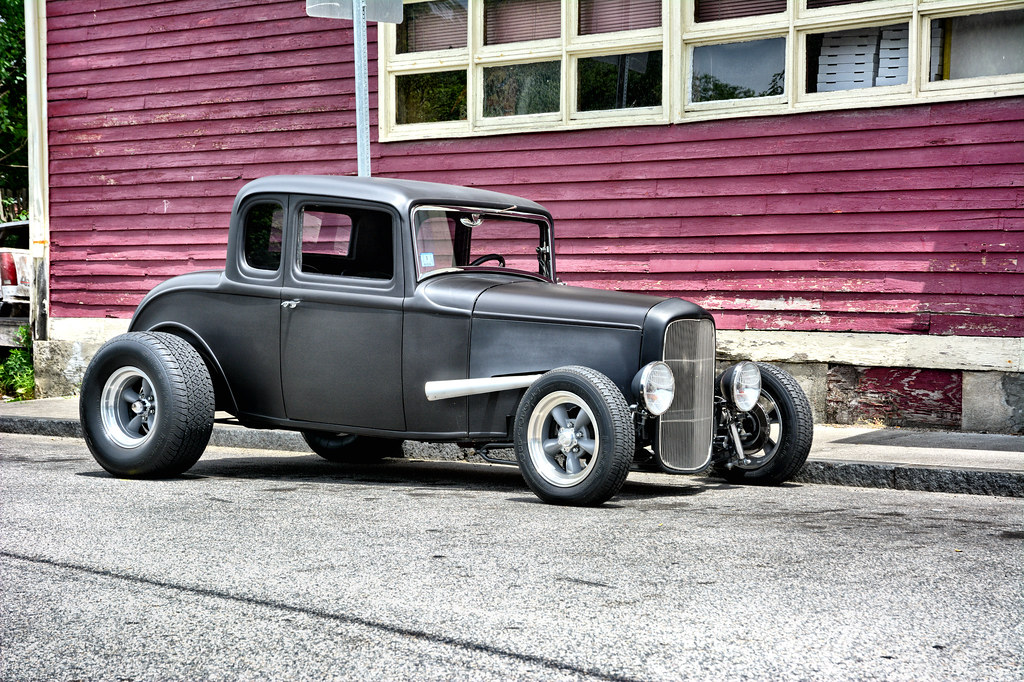 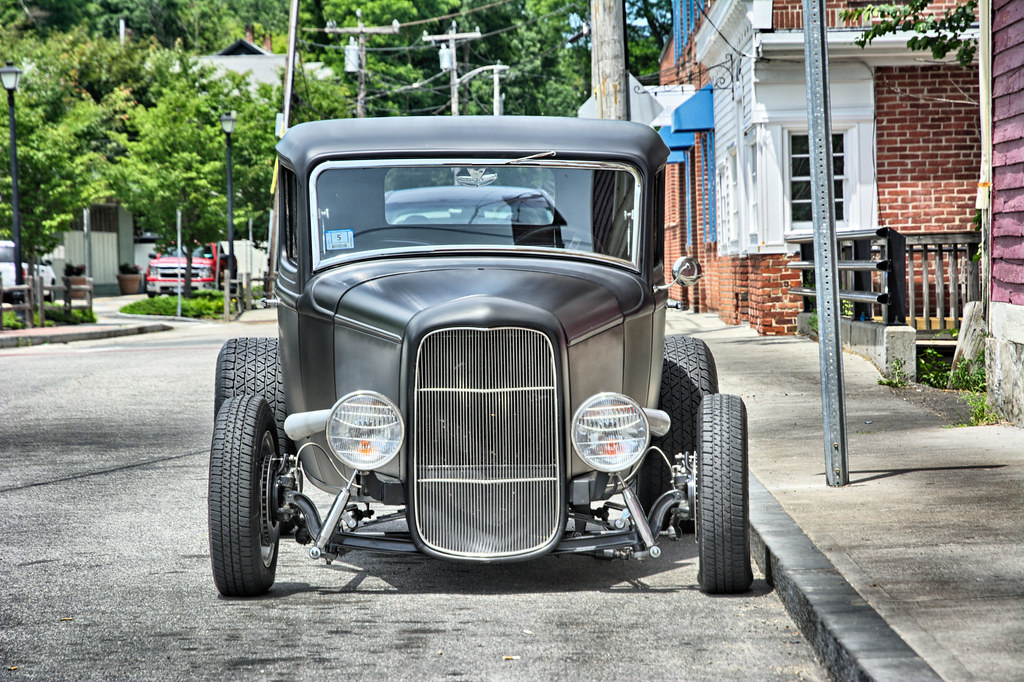 George's was right near the Site of the Lincoln Mill now gone but left it marks on the ground.


The Lincoln and Anchor Mills complexes were on North Main Street on the Pascoag River. There was a sawmill here as early as 1790, a cotton spinning mill in 1807, and then a mill for making snuff. Woolen and worsted goods were manufactured until closed in the 1960s. 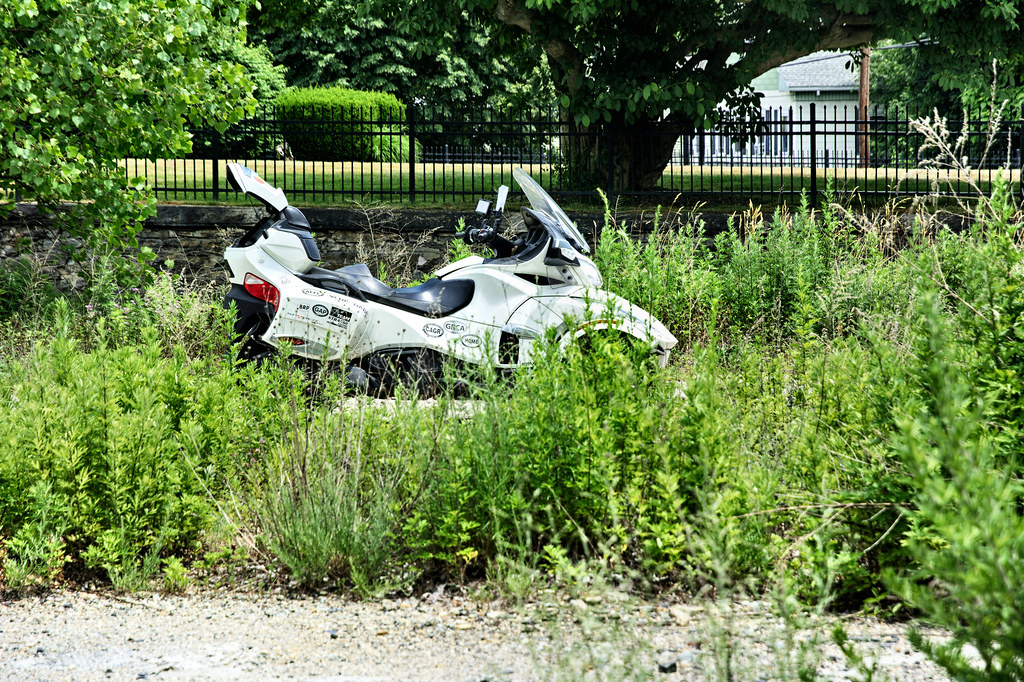 Back out on Rt100 in Pascoag headed for the site of the Granite Mill, an AGS spot. Today a CVS sits on the site. all that remains is the dam and water chase. 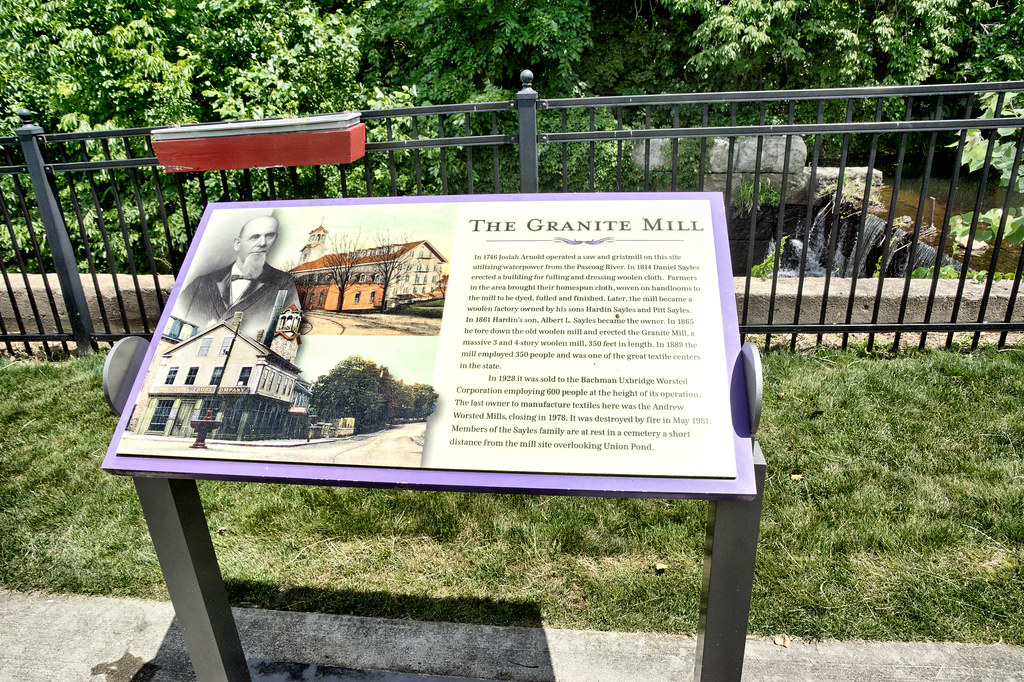 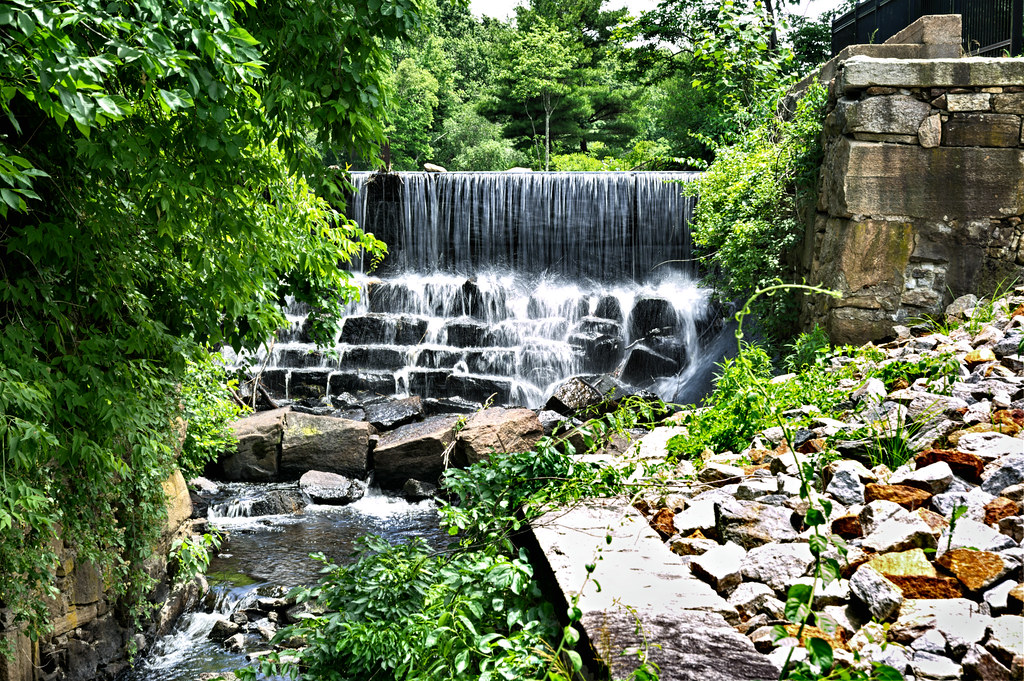 A jog of onto Reservoir Road to capture the Pascoag Reservoir. The shore line is chock full of residences to viewing opportunities of the reservoir from the road are limited.


Continuing up RI 100 (Church St) making stops at the Pascoag Public Library and Pascoag Community Baptist Church which was written as the Free Baptist Church in the Guide. The doors for both the church and library I found stunning.

Continued up RI 100, catching this park out of the corner of my eye, more specifically the dam and bridge. It is known locally as White Mill Park.

Just up the road is the Wilson Reservoir Boat Launch. It's in the Guide so I stopped for a picture.


Still on RI 100 is now Wallum Lake Road. Nothing special about this intersection other than it does branch off temporarily for Forger's Cave in the Guide, which looks like a lot of bush whacking to get there. Still stopped for a photo.


Last two stops are in the same location. Bill Gifford, a good friend, showed me this place awhile back. Today I had reason to stop and get some pics. It was on the agenda. While I was taking the picture of Wallum Lake in the back of the buildings, I saw a man with a blue shirt walking in my general direction. I realized his destination was where I was standing. He introduced himself as Eric for Security. He informed me there were patients in the immediate area and I would have to stop taking pictures and leave the area. Having been thru this exact circumstance in other facilities of this nature, I nodded agreement and got back on my bike. He was polite and non-threatening and then made the comment he really liked my bike. From there I proceeded toward the large older building and then left the premises.

Wallum Lake Sanatorium (visiting days Thur. and Sun.) dates from the early years of the present century. The site was purchased, and the first buildings were erected, under a legislative commission established in 1902. In 1935, the control of the institution passed to the State Department of Public Welfare, Division of Hospitals and Infirmaries. At the present time the hospital has a 430 bed capacity; admissions are limited to residents of the State. The resident staff includes the superintendent, a senior and five assistant physicians, pathologist, pharmacist, and registered nurses. An extensive building program is at present under way, which will result in greatly improved facilities. The village of Wallum Lake has a few Armenian residents who work in the hospital or on their own small farms. On Badger Mountain (alt. 720), about 1 mile south of the lake, lived in the 188o's a lawless crowd, who sometimes drove to town 'a hilarious wagon load, the feminine contingent powdered and painted to the last degree.'
Rhode Island: A Guide to the Smallest State, Tour 9 p.444
********************************************************************************


So ends this particular days jaunt around my backyard. Not a lot of miles, right around 50+, still took me 6 1/2 hours to get around.


The Pertinent Part of the Trip

Posted by Willie aka NomadWillie at 12:19 PM